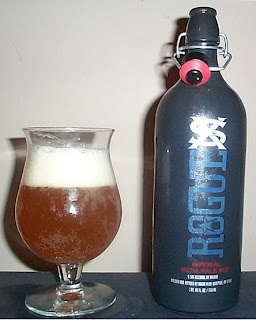 I made my first trip out to Premier Wine and Spirits on a fine Friday evening after work to take a look at their wide variety of beer and boy to they have a nice selection! I was like a kid in a candy store, I just couldn't decide what I wanted. I picked up one that was previously requested as well as another from a brewer I had heard a lot (more to come on those another time) but then I set eyes on exactly what I was looking for... Rogue's XS Imperial India Pale Ale. $20.02 for a 750ml Ceramic bottle @ 9.5% ABV this beer is no joke. A highly rated beer already, winning 2007 Beer world championship as world champ, I knew I was in for a treat.

It poured a fairly thick, cloudy orange color with a large white head that retained for a quite a long time and thick lace. The aroma was very hoppy and extremely citricy landing somewhere between peaches and oranges with light smell of alcohol in the background. The taste was like nothing ive ever had before; instantly I was hit with a punch of hoppy bitterness for just a split second which quickly turned into a nice smooth almost fruit juice-like peachy sweet taste and finished off with a ever so elegant alcoholic aftertaste like that of a vodka. Now I can't say that I usually like a vodka like taste in my beer but this seemed to fit, leaving your mouth wanting another smooth refreshing journey. The texture was fairly creamy with moderately heavy body. This beer is not for the faint of heart; its on the extreme side of beers so if you're looking to try this out, be prepared. Overall I give it 4.5 out of 5!

Tasting Notes:
Above and beyond an India Pale Ale—I2PA is radically hopped with an intense aroma and hop bitterness.

So far, despite my French descendants, I have not had much luck finding a good French brew. I cracked open a can of Kronenbourg 1664 hoping to change that. It poured a nice light golden somewhat amber color. The aroma was very calm, not much to distinguish itself here, a little hoppy which was a good sign but that about it. The taste was still quite faint but had a nice light bitter taste to it mixing with a bit spice and some sweet notes. Nothing spectacular about this beer but very drinkable. 3 out of 5
Posted by Joe at 8:40 PM No comments: 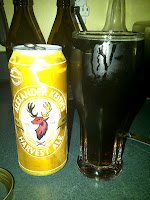 I was surprised to see this one from Keith's as I had heard nothing about it. Now in the past Ive always been a Keith's fan, Ive since out grown that taste as Keith's IPA taste like water with a some specs of flavors in it. Nonetheless I am loyal to my long time friend.

This ale poured a nice dark brown color with a clean head on it. The aroma was chocolaty and a little nutty. The taste was of roasted nuts, malts, and sweet chocolate with an accentuation bitterness of hops. Overall I was quite impressed with this new product and would drink it again; 4 out of 5
Posted by Joe at 12:40 PM No comments: 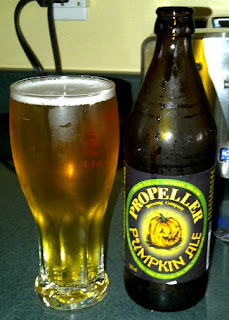 I recently took a trip down home and my Mom had conveniently picked up some beers for us to try, one of which was the Propeller Pumpkin Ale I had heard so much about. Brewed with Howard Dill's world famous atlantic giant pumpkins this fall special is a local hit.

It pours a golden/orange lightly clouded color with a small but present and lasting head. The smell is of that of a pumpkin pie with some spicy notes. The taste is light pumpkin, medium spices, light malt, pretty light all around really and a low-medium carbonation. Overall I liked this one, and being my first pumpkin ale I was quite happy with it and can see why it appeal to such a wide crowd. 3.5 out of 5
Posted by Joe at 10:28 PM No comments:

Ah fall... a great time for great beer and this fine Garrison Oktoberfest Brau is no exception to that. This marzen style brew pours a rather dark brown color yet light enough to still be quite translucent this Garrison special has a medium white head. The aroma is mild and malty with hints of caramel. The texture is creamier then expected yet still pretty light in taste. I found the taste to be very similar to the propeller hefeweizen actually, tasting of toasty malts with a fair amount of sweet notes and again hints of what seems to be caramel. I think it may be a little lacking on the hops for my particular taste but still a good brew nonetheless. 4 out 5
Posted by Joe at 9:40 PM No comments:

Ive been busy of late... drinking new beers that is! The bad news is I havent had the time to write up full reviews on some of these but I figured it was time to update you all on what Ive had the honors of trying as well as my rating of them:

So there we have it, I believe that brings me up to #60 and I have some new beer in the fridge waiting for a review so keep your head up for my next post soon!
Posted by Joe at 8:03 PM No comments: