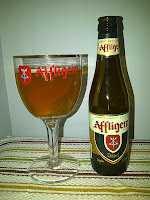 The third and final rendition of the Affligem pack is the Affligem Tripel. This is extremely similar to the Affligem blond but this time coming in at a crisp 9.5% ABV. I wish I had both this and the blond side by side to compare but it pours a hazy golden color with a fair head, decent retention and lots of lace. The aroma is again of fruity and a little less musty. Taste is fruity this time picking out more of a peachy taste but still spicy and sticking with the heavy carbonation. The alcohol is a little more present here but only slightly. Again it finishes with a nice dry kick and light crisp taste making this very drinkable. Affligem really kicked it up a notch and fit its great 6.8% blond into a classier 9.5% ABV beer! Excellent... 4.75 out of 5
Posted by Joe at 10:07 PM No comments: 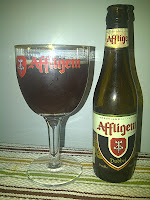 The second Itteration of the Affligem family of beer the Affligem Dubbel is a nice, light brown, somewhat cloudy color when poured. It has a small tan head with medium to short retention. The aroma is of oak wood and malty. The taste is malty, with some caramel and a little bit of spice and maybe a touch of cinnamon. This beer is quite light for a darker beer but is the first Ive tried of this particular style so I was not sure what to expect. I enjoyed this one. 4 out of 5
Posted by Joe at 11:54 PM No comments: 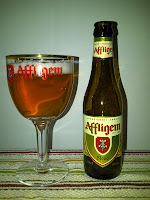 Another great one pack I received was a 4 pack of Affligem (2xBlond, 1xDubbel, 1xTriple) + a great Affligem labeled goblet. I dove head first into the Blond...

The Affligem blond is labeled a strong Belgian Ale; it poured a deep golden yellow with thick head, great retention and lots of lace. The smell was musty, hoppy and a little fruity. The taste was pepper-like spice mixed with a fruity banana sweetness and finishing with a moderate bitterness. It is heavily carbonated giving it a nice dry kick. This Blond is masks the 6.8% ABV well and is extremely light making it easy to drink. Will drink again - 4.25 out of 5
Posted by Joe at 11:38 PM No comments: 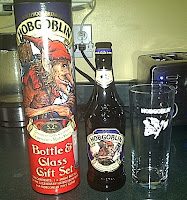 Happy holidays everyone! This Christmas I was grateful to find a plentiful variety of beer under the tree and decided it would be a great time to start blogging more frequently again.

First up is an interesting English Ale, Hobgoblin by Wychwood Brewery. I received this in a gift pack as seen in the picture which came with its own branded glass. This is a dark red-ish brown ale with a light tan head with an aroma of dark chocolate and roasted malts. The taste was of rich malts, chocolate, hints of caramel making it sweet but with a perfect mix of bitterness. I enjoyed it but not sure if I could drink more then 2-3 of these in a sittings despite the average 5.2% ABV.

So the holiday season has started and its been a long time since I posted anything... I took a short time off to just kick back and enjoy some of my favorites before coming back strong in 2011! But this doesn't mean I haven't had a chance to try anything new...

On a recent trip home I ended up at a family gathering at a local brew pub known as Rudder's, in good old Yarmouth, Nova Scotia. Ive had good word that they had some fine brews here so I was excited to get started on them! Conveniently they had a sampler pack which was 3 7oz glasses of any of their brewed beer. I opted for the Yarmouth Town Brown, Rudder's Red and one that was not on the menu which we will call the Rudder's Irish Ale.

First up I had the Irish Ale, it was a somewhat cloudy, pale brownish color and with little head (which seemed to be caused by the small portions) and had a small aroma of dry malt. The taste was sub par for what I expected and again of just dry malt, a fair alcoholic taste and not much else, very simple. It did however go down eays and wa snot very heavy. 2.5 out of 5

Secondly I had the Rudder's Red which was a nice deep red color as expected with a retaining head. The aroma was gentle yet distinguished. The taste was surpassed expectations, I expected this to be your average amber ale, and I was wrong. It had a nice complex and smooth taste with just the right amount of bite from the hops. It had been a while since I had an amber ale of this quality 4.5 out of 5!

Lastly was the Yarmouth town brown. Now i'll tell you what, I love the name, it just has a great ring to it. The beer itself unfortunetly did not carry the same ring... The beer was a brown almost oak-like color and had a heavy aroma to it. My first sip was not where I thought this beer was going. It was fairly heavy, with an earthy taste to it and was missing some hops to add complexity. I see where this beer was trying to go but It needs a little more "umph" to it. Overall tho it could have also been much worse. 3.5 out of 5