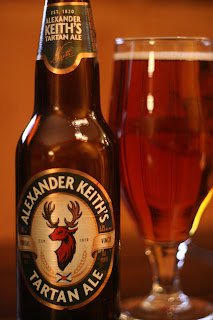 How's everyone been? Its been a while... Took a few month's off to do a little more of the drinking beer and a little less of the reviewing beer but I'm back! Ive also been scoping out new designs for the site but more on that at a later time... Time to review!

Now Ive been slammed a couple time's on my Keith's reviews by some unnamed critics but truth is as far as macro brews go I do like my Keith's. When I was first made aware that they had a new limited release brew master's special Keith's tartan ale I was excited to give it a try.

This beer is a Scottish style ale that has a golden brown copper color to it with a small white head to it. The aroma is not very strong but is sweet in nature. The taste is actually one of the best for a macro brew, a little bit sweet caramel, touch of smokiness and a little malty and very smooth. It is quite carbonated but that is my preference. At 6.1% ABV and a high drinkability with a light, smooth taste this was one of my favorite go-to beers for the last little while.